The Ever-Prickly Tony La Russa Grows Pricklier By the Day

Jeez, Tony, take a chill pill, will you? Give it a break. Smell the roses. Your rants and raves have grown old and tired.

At issue, of course, is Temperamental Tony's latest flameout, chronicled this morning in the Post-Dispatch by Cardinals beat writer Joe Strauss.

Tony La Russa, per usual, is over-reacting, this time to ESPN reporter Buster Olney's story yesterday that "according to sources, an idea has been kicked around the Phillies' organization internally, with discussions about proposing a swap of slugger Ryan Howard for St. Louis superstar Albert Pujols." 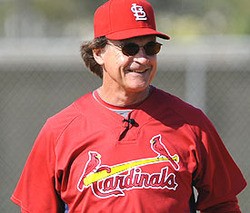 Tony could've laughed it off, dismissed it as nothing more than a crazy, utterly outlandish rumor. But Temperamental Tony never laughs anything off, nor does it take much to set him off.

The moody Cardinals skipper much prefers the snit fit. La Russa angrily claims the trade rumor could create a clubhouse distraction. But to go off half-cocked the way he's wont to do, to draw unncessary attention to a purely speculative story, that's what really creates a distraction.

You're right, Tony, there is nothing going on in St. Louis. Read Olney's piece. He only reported that it was the Phillies who might be pondering such a blockbuster deal. There is no mention that the Cardinals organization has in any way entertained notions of dealing away their franchise player.

Olney, by the way, is no hack. An author, former Yankees beat writer for the New York Times and Hall-of-Fame voter, Olney is widely respected in baseball circles.

Tony, it's you who's abusive.

The most telling line in Strauss' story is this sentence: "The manager's rebuke broke what had been La Russa's uninterrupted run of pleasant dealings."

You see, it is news when La Russa has pleasant dealing with the media, when they're not having to walk on eggshells in the presence of "La Genius," as KSLG's Kevin Slaten has come to call him.