So How Will Texas's New Ultra-Conservative Interpretation of History Affect Missouri? 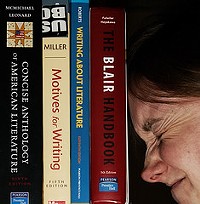 The often Byzantine subject of educational curriculum standards rarely gets much attention, mostly because lists of said standards are too vague and boring for anyone but a dedicated educational professional to wade through. For example: "Produce writing in which the organization, development, substance, and style are appropriate to task, purpose, and audience."

Last week, however, the Texas Board of Education drew outrage for its new social studies curriculum which will, among other things, insist that "capitalism" be referred to as "free enterprise" (because the commies in the U.S. government have given the term "capitalism" such a bad rep), stress how the Founding Fathers were really guided by Christian principles and allow for questioning of Darwin's theory of evolution.

It is worth noting that none of the members of the board is a historian. It's enough to make a good, history-loving liberal cry, and many of them have.

Why the fuss? Texas, along with Florida, is the nation's biggest textbook buyer and textbook companies will, naturally, want to pander to its standards in order to guarantee sales. (Full disclosure: I once worked for a textbook company where the editors, in order to make a sale, went through the books with a black marker eliminating words the Texans deemed offensive.) So will Texas's new curriculum affect Missouri, too?

Andrea Wood, director of assessment of the Missouri Board of Education, says it's too soon to tell. "It takes a while to produce and publish a new textbook," she explains.

But Wood believes that the new common core standards the Obama administration released last Friday, March 12, will have a far greater effect on Missouri classrooms. "It's a national movement toward national standards," she says.

The new national standards don't contain any recommendations about information that ought to be included in textbooks, only about general reading and writing skills students are supposed to have developed. Stuff like, "Produce writing in which the organization, development, substance, and style are appropriate to task, purpose, and audience."

Looks like we'll have to put our rage on ice for the next five years or so. By which time, we'll probably have forgotten all about it, because who reads textbooks anyway?