Morgan Ensberg and The Night the Lights Went Out for Lidge 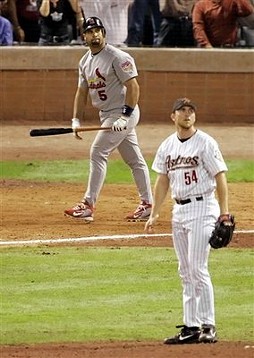 From the Twitter of Rob Neyer by way of Matthew Leach, we have a real blast from the past: Morgan Ensberg, former Houston Astros' third baseman, discussing Albert Pujols' shot in the 2005 NLCS. Apparently Ensberg was positioned wrong all those years ago, and it was that poor positioning that allowed the rally which culminated in Albert's home run to get off the ground in the first place.
First off, I wasn't aware Morgan Ensberg had a blog, but I'm all kinds of excited now to read it. And second, I had no idea anyone who played for the Astros could possibly be that intelligent. Hell, I'm honestly surprised any of their players can read. (Okay, before anyone gets all upset at me for calling the Houston players illiterate, I don't really mean that. I'm sure plenty of Astros players can read. Coloring books are still considered books, right?)
In all seriousness, it is really fascinating to see one of the great moments in the recent history of my own team through the eyes of someone on the other side of the fence. We've all seen the video a thousand times, and we've seen the photo over and over again of Albert staring off into the distance and Brad Lidge crouching down then standing and turning to watch, well aware he wasn't getting that slider back. We've seen Andy Pettitte's reaction shot, the slow Oh...My...God.
I remember hearing the stories from that time, about how several of the Astros' players at the time were teasing Lidge on the flight to St. Louis that night, telling him they were pretty sure Albert's home had just hit the plane. It was nice to know that even in the face of such a heartbreaking defeat, the players were able to maintain a bit of humor about themselves, to keep some perspective.
I remember sitting in my parents' living room that night, having gone up for Sunday dinner, watching the end of that game as the Cardinals were seemingly headed for elimination in just five games, a pathetic showing after the incredible 2004 NLCS. I was so sure, in fact, they were done I didn't even get excited when David Eckstein and Jim Edmonds got on base. Even when Albert stepped to the plate, I didn't expect a miracle. Brad Lidge was in my head; even though the Cardinals had managed to hit him a little here and there, he still just felt invincible somehow.
And then, of course, he threw a slider that didn't slide quite enough. I jumped off the sofa and yelled; my mother ran down from the kitchen where she had been washing up the dishes, and we both just stood and stared at the replay. I marveled at the quietest stadium I had ever heard, or at least the biggest noise differential from loud to near silent I had ever heard.
That's my memory of the moment, a memory of yelling and staring at one of the most awe-inspiring hits I've ever been privileged to witness in all my years of fandom. But there was so much that went into that moment, so much background noise which all culminated in that big blast, and we hardly ever think of it. Sure, I remember Eckstein and Edmonds fighting their way on base against the man still known at the time as Lights Out, but those guys barely even have a supporting role in the widescreen playback reel of baseball highlights in my head. All that buildup is essentially window dressing, small details you need to hold up the story of a Moment that really mattered. Honestly, I'm sure one day those details will go completely unremembered when people tell the tale of Albert's bomb.
Morgan Ensberg remembers, though. And he's going to tell you just how and why it happened. I've heard both god and the devil are in the details, but I can't really vouch for either one, not being all that spiritually inclined myself. The game, though? The game is always in the details, even if they're never remembered later on.