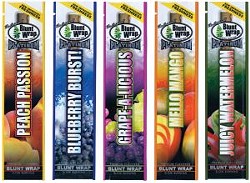 In a unanimous 45-0 vote, the Illinois Senate approved a bill yesterday that would classify "individual tobacco wrappers, known as blunt wraps, whether in the form of a single tobacco leaf, sheet or tube," as drug paraphernalia.

If approved by the House, possession of a blunt wrap would be considered a misdemeanor in the Land of Lincoln.

Sales of Swisher Sweets and dozens of other brands of cheap, flavored cigars often used for rollin' would not be affected by the proposal.

The bill, SB3734, was introduced by Sen. Kwame Raoul, a Democrat from Chicago.

According to Kathleen Foody of the Post-Dispatch's Political Fix blog, Raoul "said the wraps are often sweetly flavored, encouraging young people to use them rather than hollowed-out cigars to smoke marijuana or other drugs."

Is it just me or does that make it sound like Raoul would prefer kids to use hollowed-out cigars for herb smokin'?