What's Up with Those "Civility" Campaign Yard Signs in Webster Groves? 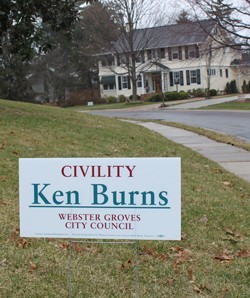 Ken Burns' campaign yard signs would suggest that he's taking a rather quizzical tack in his hopes to win one of the three open city council seats in Webster Groves on April 6.

An architect who has never before run for political office, Burns, 58, has lived in Webster Groves -- "six square miles of the American dream," as a controversial CBS documentary once proclaimed it -- for more than a quarter-century. As to his reason for making civility his campaign theme, well, he says, he simply likes the word.

"It speaks to who I am, one with a good temperament, a patient, reasonable person. It is a good word," Burns adds, sounding somewhat like Chauncey Gardiner, the simple gardener in Being There, whose TV-informed utterances are mistaken for profundity.

"I think it is a good way for government to handle itself. You know, civil behavior cannot be a bad thing, right?"

When nudged to elaborate on whether the sign implies his belief that there is a lack of civility in Webster Groves' government, Burns hints there might be a bit more to this.

"Yes, I've done more than 100 projects in Webster over the past 25 years," says Burns, "and I have had some rather noted differences with the city's architectual review board." He did not go into specifics.

His opponents, meanwhile, are not sure what to think of Burns' signs -- nor is Mayor Gerry Welch.

"I don't know why he has done this," says Welch. "We certainly have a very civil discourse in our council meetings and so on."

"I have never talked with him," volunteers Toni Joyce-Hunt, one of the four council contenders running. "But we do have a candidate forum on Thursday (March 18), and I'm anxious to find out what he means by that."

Says candidate Fred Hill: "I don't want to get into it. I do know he's had some problems with the [architectual review] board."