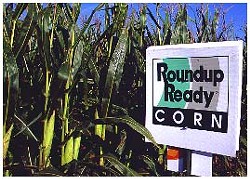 Competitors, activists, farmers, politicians. They all get a chance to weigh in on St. Louis-based Monsanto today at a "workshop" in Iowa that's to focus on antitrust behavior in the agriculture industry.

In attendance at today's meeting will be U.S. Attorney General Eric Holder.


Friday's meeting in Iowa will focus on genetically-modified seeds, the 14-year-old market largely created and led by Monsanto, which has at least one of its patented genes in about 90% of soybeans grown in the U.S. and in about 80% of U.S. corn.


At issue specifically is the cost of Monsanto's RoundUp Ready seeds which have become the industry standard and nearly quadrupled in price in recent years, according to the Journal.

Also in attendance today in Iowa is Missouri Attorney General Chris Koster. Through a statement released this morning, Koster says:


"I anticipate that as technology continues to advance, antitrust issues will play an increasingly larger role in agriculture production. The goal is to ensure competitive food production in order to keep prices low and the market healthy. Monsanto's unique role in seed production makes our office's continued involvement in this issue all the more important."

Today's workshop is the brainchild of Christine Varney, the attorney general's antitrust chief, who came up with the idea for the hearings after hearing concerns from legislators in farming states.

"This is a rare opportunity," Diana Moss of the American Antitrust Institute tells the Journal.