The Tigers Lay a Tournament Egg 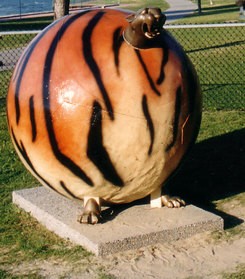 The Missouri Tigers certainly didn't do themselves any favours in the Big 12 Tournament. Going in to the tournament, they were seen as a team playing their best basketball at the right time of the year. Now, after dropping their opening round game to Nebraska, 75-60, the Tigers aren't looking nearly so strong.
It's really unfortunate, too, considering how much ground the Tigers had gained in recent weeks. Just how much of that ground they gave back is up for debate, of course, but it's clear their standing will take a hit.
With the NCAA Tournament seeding process just around the corner, the Tigers really needed a good showing to move up the ranks. Most analysts had them ranked anywhere from a 6 to a 10 seed, depending on how strong they finished the regular season and their conference tourney performance. The average consensus seemed to have them coming in around the 25th to 28th best team inthe tourney, meaning a 7 seed was the most likely outcome. It's clear now after losing to Nebraska they'll be toward the lower end of that spectrum. Unfortunately, there is a definite difference between playing an 11 and playing a 7.
What's even more frustrating is that the Tigers had handled Nebraska so easily in the regular season, beating them twice already this year. On Wednesday, though, the Tigers showed little of that trademark tenacity which has made them such a feared opponent the last two seasons. Against a Nebraska team with only two conference wins all year, the Tigers played slow, soft basketball and predictably got bounced.
Most worrisome of all is how poorly the Tigers have played since losing Justin Safford. Since Safford suffered a knee injury, Mizzou has gone 1-3 and has shot under 40 percent from the field in three of the four contests. Losing Safford was certainly a blow, but it's surprising to see just how lost Mike Anderson's team has looked without him. The Tigers have made their name as a gritty, hard-nosed team capable of beating you on the defensive side of the ball more than a scoring juggernaut, but even the most stalwart of defenses can't support sub-40 shooting days.
So what does this all mean for the Tigers as they gear up for the big dance? It means a lower seed, a tougher opponent, and probably some serious soul searching in the MU locker room. Whether it will also mean an early exit from the NCAA Tournament remains to be seen, but if Anderson's bunch play anything like the way they did against Nebraska when the big tourney kicks off, I can't see them surviving very long.