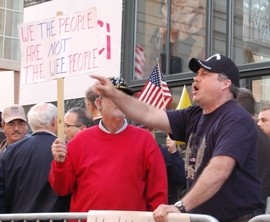 The year-long debate over health care reform in Congress has resulted in no bipartisanship and plenty of heated comments from both sides of the aisle. A microcosm of that debate played itself out in downtown St. Louis when President Obama stopped by for a fundraiser.

St. Louis police yesterday evening closed Washington Avenue from 8th Street to 10th Street outside the Renaissance Grand Hotel where Obama was hosting the $2,400 per person dinner. Soon protesters on both sides of the health care debate had lined the sidewalks.

And what did they say yell at each other?

"We're sick, we're broke, and we're not gonna take it any more," chanted the supporters of health care from one side of 9th Street.

"Move to Canada," was the response from the other side, which was largely dominated by tea partiers waving those yellow Gadsden flags.

And when the anti-health care crowd started chanting "Who's gonna pay?", the other side simply responded with "Healthcare for all."

David Goddard, of Piedmont, Missouri, saw a woman with two children waving signs in support of health care reform and started shouting across the street "Do you have any idea what you're doing to these kids' future? Don't believe it? Government control, baby. Just like Europe."

Goddard says he does believe that the country needs health care reform, but "it's not the kind of health care that this regime is proposing."

Among the supporters of health care reform was a group of activists urging Sen. Claire McCaskill to sign a letter saying she would support a public option to be introduced through reconciliation, the Senate tactic that would allow democrats to bypass a filibuster.

"Sign that damn letter," says Patricia Bynes, one of activists. "There are 40 Senators that have signed that letter for a public option through reconciliation. We're trying to get her off the fence."

Periodically throughout the rally/protest, both sides would find a chant they agreed on, such as the always-popular "U-S-A." And when somebody started singing the national anthem, most people joined in. As soon the Star Spangled Banner was done, however, both sides went back to shouting at each other.

Ben Williams, from St. Louis, was one of loudest pro-health care supporters. Even though it was his first time at a rally and his encounter with the St. Louis Tea Party, Williams says there is nothing wrong with disagreeing about politics.

"I love 'em. It's democracy at it's best," says Williams, while taking a break from shouting at the Tea Party side.

Bill Hennessey, one of the founders of the St. Louis Tea Party, addressed the crowd with a mega-phone shortly before leaving around 6:30 p.m.

"I can't imagine this even across the street will last much longer," says Hennessey. "You can only tell so many lies in one night."

Daily RFT caught up with Hennessey at the end of the protest to ask him, if health care reform passes, what is next for the St. Louis Tea Party.

"We've already begun moving into getting people elected," Hennessey says. We want to take over. I honestly believe that you have to operate within one of the two parties. So many organizations, left and right, have tried to start third parties and they don't go anywhere. What works is what Reagan did back in the '70s. He took over the Republican Party. They didn't want him. He got people elected as precinct leaders. That's what we're going to do all summer. We're going to take over the republican party here locally and in cities all across the country, so that we have a real conservative base in one of the parties. Because I don't think we have that right now."