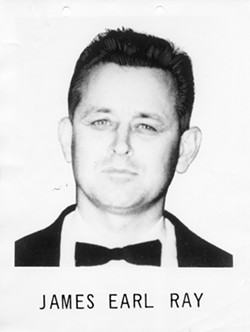 This Sunday marks the 60th anniversary of the F.B.I's "Ten Most Wanted Fugitives" list, a program born in 1950 when a reporter with the UPI wire service asked the agency to provide him a list of the criminals it most wanted to capture.

Former F.B.I. director J. Edgar Hoover was so impressed with the publicity from the article that he decided to make the list permanent.

To date nearly 500 fugitives have made the list. Of those, just four were added by the St. Louis bureau of the FBI and all of them prior to 1964.

Think you know your local crime history? Let's see if you recognize/recall any of the following four folks and their crimes.

1. Joseph James Brletic was wanted for robbery in Robertson, Missouri. Listed in 2/9/1953. He was arrested in Lancaster, California, by the Los Angeles Sheriff's Office after being recognized from a photograph in the Los Angeles Herald-Express newspaper.

2. Gordon Lee Cooper was wanted for armed robbery in Poplar Bluff. Listed in 5/11/1953.  Cooper was arrested in St. Louis, Missouri, following an investigation based on a citizen's tip. Cooper was recognized from newspaper publicity.

3. Raymond Louis Owen Menard was wanted for burglary in St. Louis. Listed in 5/3/1954. Menard was arrested in New Orleans, Louisiana, by local police after a citizen recognized his photograph from a local newspaper.

4. Thomas Edward Galloway was wanted for murder in St. Louis. Listed in 6/24/1964. Galloway was arrested at a golf course in Danville, Virginia, by the FBI after a citizen recognized him from a newspaper article.

Okay, we know what you're thinking: These guys made the Top 10 for robberies and one lousy murder?

The answer, yes. But then the F.B.I. had different priorities back in the day. Here's an explanation from the agency on the changing use of the Top Ten list over the decades...

Just as the priorities of the FBI have changed, so has the makeup of the "Top Ten" list:
This emphasis, along with crimes against children, white-collar crime, and gang violence, continues today.