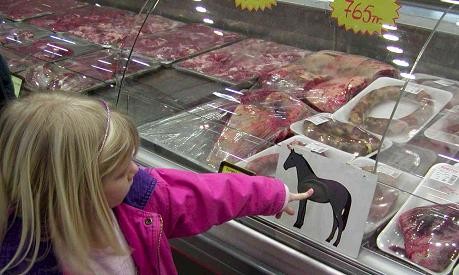 A bill wending its way through Jefferson City would allow Missouri to become the only state in the U.S. to process horses for human consumption.

State Rep. James Viebrock, a Republican from outside Springfield who's sponsoring the legislation, believes slaughtering horses in Missouri will aid the overall welfare of the animals in Missouri by providing owners an option for unwanted or neglected horses.

Besides, it's not like Missouri horses today avoid the slaughterhouse. Old horses are routinely sold at auction here and shipped to Canada and Mexico for processing. (The meat is popular in Europe and Japan, where the statement "I'm so hungry, I could eat a horse," is to be taken quite literally.)

Viebrock's bill has the support of the state's agriculture director and many people in the horse industry. As you would expect, animal-rights advocates are opposed to the bill.

The Post-Dispatch has a loooong article today on the subject, including reactions to the legislation and some recent history on the horse slaughtering. The last processing facility to operate in the U.S. was in Illinois and closed in 2007.

In introducing the bill last month, Viebrock and his supporters told legislators that the bill is "environmentally friendly" and added that the $1,500 cost for burying a horse has "decimated the equine industry."