Prop A Leader: Transit Tax Must Pass or Region is in Deep Trouble 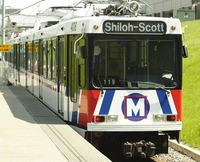 Chesterfield Mayor John Nations, the man leading the charge for Proposition A campaign, spelled out the dire consequences that could befall the entire metropolitan region if the transit tax fails to get a thumbs-up from St. Louis County voters next month.

"If it is defeated," warned Nations, "Metro service will be cut by 50 percent. Metro will lose 650 jobs right off the bat. But it's not just jobs that will be lost. If we lose this, the region will not be able to compete for jobs. It will not be attractive to employers."

Nations, who heads up the grassroots campaign group Advance St. Louis, went on:

"Look, in the whole metro region today, we have 1,320,000 jobs. That is 4,000 less jobs than we had on December 31, 1999. That's right, we have had a whole decade of zero job growth. Public transportation is absolutely vital for our economic health." 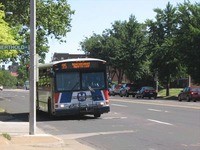 Proposition A asks voters to approve a half-cent sales tax that will raise an estimated $75 million a year in St. Louis County. The money will be used -- not only to expand the MetoLink light-rail system -- but to restore deep cuts made a year ago to bus and Call-A-Ride services.

Nations said the half-cent tax hike will cost the average St. Louis County citizen about $1.25 to $1.30 a week.

A similar measure, Proposition M, was narrowly defeated in November 2008, garnering just over 48 percent of the vote.

Nations, though, believes the climate has changed, now that the electorate have seen the deleterious impact severe slashes to public transit services can have on people dependent on buses and trains for their livelihood.

"I think people are very interested in this (election) and want to revisit this issue," said Nations.

Nations added that he's seen no recent polling data, but that a survey earlier this year showed the measure passing, with percentages in the low 50s.

Turnout, too, will play a role, though it's difficult to measure how significant a factor it will be. Obviously, an election on April 6 will have nowhere the voter participation a general election generates.

The average turnout for a sping referendums in St. Louis County is about 12 percent, but Nations is figuring on a higher number this time around.

"I'm sensing that people are very, very interested now in doing something to improve public transportation," he said.