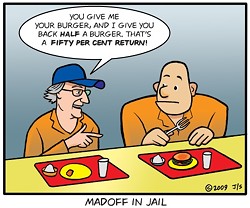 It probably doesn't approach the level of Cathy Gieseker -- the Audrain County Ponzi-schemer who swindled 200 Missouri farmers out of $27 million -- but it sounds like the FBI is investigating the owner of a southern Illinois grain elevator for some Madoff/Gieseker-esque dealings.

The businessman is John Kniepmann from Breese, Ilinois, a tiny town about 30 miles east of Belleville. He was the owner of The Grain Exchange LLC in nearby Carlyle until the Illinois Department of Agriculture found "financial deficiencies" in his books.

Yesterday, the FBI showed up at Kniepmann's former home with a search warrant and a U-Haul. They weren't there to help him move.

Will Buss of the Belleville News-Democrat has the scoop:


In February 2008, after the agriculture department suspended his license, Kniepmann told the News-Democrat that souring corn and soybean prices had hurt his and other grain operations. At that time, corn prices had jumped from $2.50 a bushel to $5.50 a bushel between the beginning of 2007 and 2008. Soybeans are up from $6 a bushel to $13 a bushel, and wheat has jumped $3 a bushel to $9 a bushel in that span.

According to records from Clinton County Circuit Court, at the time its license was revoked, The Grain Exchange assigned all contracts to Consolidated Grain & Barge Co., which was doing business as Granite Grain of Cahokia. Three clients filed a lawsuit against both companies because as The Grain Exchange assigned contracts to Consolidated Grain & Barge Co., the prices of grain had risen and made the contracts less favorable to the plaintiffs.

Clinton County Court found that Kniepmann's clients "did not have reasonable opportunity to understand the terms of [their] contract."

The same can not be said of the victims of the real Bernie Madoff, who knew exactly what they were getting into but refused to rule number one of shrewd business: "If it sounds to good to be true, it probably is."