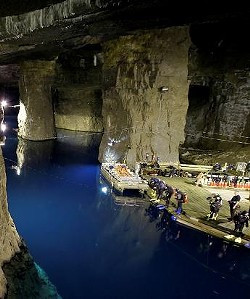 Just got off the phone with the Douglas Goergens, owner of West End Diving in Bridgeton.

Over thirty years ago Goergens and his business partner and wife, Catherine, began developing a flooded lead mine in Bonne Terre that is today said to be the largest fresh water dive resort in the world.

First made popular in the 1980s when famed marine explorer Jacques-Yves Cousteau filmed a feature on the mines, Bonne Terre (an hour's drive southwest of St. Louis) has since been covered in countless travel and news stories.

Tonight at 9 p.m. (CST) the History Channel returns to the mines after visiting in 2007 with the show Weird U.S. This time around, instead of celebrating the existence of the mines, the cable network will explore its destruction in the program Life After People that speculates on how man-made structures would hold up in a post-apocalyptic world. 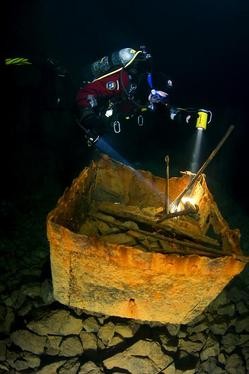 "I haven't seen the piece yet, but I know one of the topics with be the formation of giant rust-cicles," says Goergens. "The mine is one of the few places besides the site of the Titanic wreckage where its undisturbed enough for these rust-like icicles to form."

The History Channel interviewed Georgens when it filmed the piece back in December. Also slated to appear in tonight's segment on the mines is Mark Eberhart from the Colorado School of Mines.

The Bonne Terre Mine operated from the 1800s to 1960 when it was abandoned and the pumps that kept spring water out of the caves turned off. Today the mine is filled with en estimated billion gallons of crystal clear water and boasts 26 miles of navigable coastline.

In addition to luring divers from all over the world, the mines also attract some 30,000 tourists each year who tour the mines via boat.