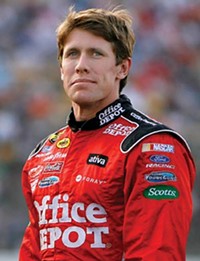 We don't regularly chime in on the goings on in NASCAR here at Daily RFT, but this item is definitely blog worthy.

As the Associated Press reports, Carl Edwards was 156 laps out of first place when he apparently decided to settle a score with his rival Brad Keselowski yesterday at Atlanta Motor Speedway.

As you can see in the following video, Edwards -- of Columbia, Missouri -- bumps into Keselowski's car sending it airborne and landing on its roof.


Prior to this young season, NASCAR officials said they were going to let racers "have at it" this year. (Translation: Drivers could be more aggressive in their racing.) Now NASCAR is second-guessing its decision and could fine or suspend Edwards for yesterday's incident.