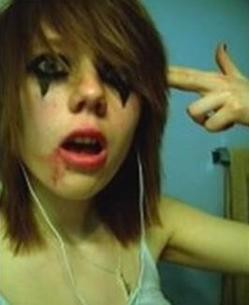 Remember the case of Alyssa Bustamante?

Last fall the then 15-year-old "emo teenager" from outside Jefferson City allegedly dug a grave and plotted the murder of her nine-year-old neighbor. Days later authorities say Bustamante followed through with the act, strangling and stabbing to death Elizabeth Olten because she "wanted to know what it felt like" to kill someone.

Now, 16, Bustamante has a a pretrial hearing this coming Monday and her attorney has asked the court that she be allowed to wear her own clothing -- instead of a prison garb. As the Associated Press reports, the attorney believes that the "pretrial images the teen in jail clothing would impair the presumption of innocence."

To which, Daily RFT asks: Has the attorney ever seen the emo Bustamante (above) in her own clothes?

Somehow we think the jail suit might make her a bit more sympathetic. View a video of Bustamante in her street clothes after the jump...