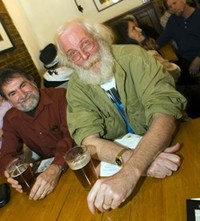 David Clewell, a professor of English at Webster University, has been named Missouri's second poet laureate.

To which we say, what the hell took them so long?

"You don't have to spend very long with David Clewell, or his poetry, to know that he has a unique perspective on contemporary American life and the characters and ideas that loom large in our recent history," Governor Jay Nixon said. "David's wry humor, tart social commentary and accessible style give his poetry a broad appeal."

A native of New Jersey, Clewell graduated from the University of Wisconsin-Madison and came to St. Louis to study poetry at Washington University, where he received his MFA. He's published seven collections of poetry, most recently The Low End of Higher Things.

His two book-length poems, The Conspiracy Quartet and Jack Ruby's America, are part of a series called Breathing in the Twentieth Century, which Clewell once described to the Riverfront Times as "an ongoing imagined history of modern American paranoia and conspiracy theory."

In that same interview, Clewell summed up his poetic philosophy:


You know, I'm coming around to the idea (and I never was really against it) that we need to get back to the poet's oldest job: telling history. Don't leave it to the shrinks or the so-called historians. Tell history, get it right. We need to get away from our navels, from our petty concerns, from that bad meal I ate last night. We need to have something we want to sing about. In too many poems, you find a birdcage with the finest metals, it's hung just right, in the right light, but there's no damned* bird!

Clewell was in Jefferson City yesterday meeting Georganne Nixon and fulfilling the first of his poet laureate responsibilities. Now, back in St. Louis and suffering from a middle-ear infection, he took a few minutes to chat with Daily RFT about his new role.

"All that hoopla stuff, it's not my style, but Mrs. Nixon is terrific. She's got substance. My thirteen-year-old son calls me the poetry overlord now. He's working on a graphic novel.

"[Being named poet laureate] is flattering, and it's an honor. It's one of those things with a general description. The laureate must be involved in six events in his/her/its tenure of laureateship and write a poem about Missouri. Walter Bargen [the previous poet laureate] ran himself absolutely ragged keeping up with events. His one word of advice to me yesterday was 'pacing.'

'Whatever I end up doing, I just want to try to remind people that poetry for me is stuff about real human lives on this planet, not off in aerie-fairy land. I hated poetry through school. It didn't seem to have anything to do with life. I want people to look at poetry outside its usual context. It's a continuation of the work I've done with inmates in federal prisons and workers on factory floors.

"I wouldn't mind taking a Harry Truman-style whistle-stop tour across the country. I really like trains."

Clewell hopes to get Missourians to read more Phillip Levine and Walt Whitman (but not "O Captain! My Captain!" which he is convinced Whitman wrote after losing a bar bet). "I'm an eclectic reader," he says. "I've got eclectic tastes. One of the things I might be good at is showing the range of styles of poetry."

Click here to read some of Clewell's work. On the blog Poetry Dispatch, Norbert Blei has posted the poem "New Year's Eve Letter to Friends," which Clewell sends out every December 31.

And go here to listen to Clewell read his poem "Too Far This Time," in memory of his friends and fellow poets Donald Finkel and Constance Urdang.

*In the original Riverfront Times article, Clewell was quoted using the word "fucking," but he says he was misquoted, not because he doesn't approve of profanity, but because that word is not in his particular lexicon of profanity.