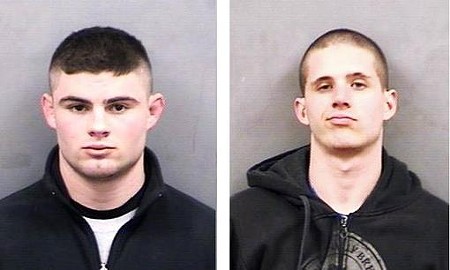 Updated 1:55 p.m.: The University of Missouri police tell Daily RFT that the two students were arrested on  suspicion of second-degree tampering, but since police believe the incident was motivated by race, the men face enhanced penalties that make the alleged crime a felony under Section 557.035 of Missouri state law.

Capt. B. Weimer with the campus police says the suspects were released after each posted a $4,500 bond. Weimer declined to comment as to why police believe the incident was race related, saying only that "fortunately" his department has fielded few -- if any -- similar complaints over cotton balls.

"The case has now been turned over to the Boone County prosecutor and it's up to that office to determine when and if they'll press charges," says Weimer. (View additional statement from Weimer and the university police here.)

In the meantime, Mary Jo Banken, spokesperson for MU Chancellor Brady Deaton tells Daily RFT that the chancellor has decided to suspend the students until the university completes a "student conduct procedure" into their alleged actions.

"The chancellor thought it was important to immediate suspend them until that time," says Banken.

The university student paper The Maneater names the accused as Sean Fitzgerald, a freshman poli-sci major and Zachary Tucker, a senior psychology major.

The paper reports that the two are "were arrested on suspicion of hate crimes and second-degree tampering." This morning, MU Chancellor Brady Deaton temporarily suspended both students this morning after an anonymous tip led to their arrest.

In the 1930s Gaines challenged the university's policy that barred blacks from entering its law school. Gaines disappeared -- never to be heard from again -- shortly after the Supreme Court ruled in his favor.

For more on his incredible tale, check out this 2007 Riverfront Times article "The Mystery of Lloyd Gaines."