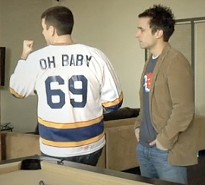 The debut episode covers much of the same territory as the sports blog: funny observations on the world of sports, the Cubs, the woeful Rams and the spouses of Cardinals players. St. Louis sports fans should enjoy this witty, weekly take, especially if they don't have time (like some of us) to look at sports blogs all day.

Now, for some quick observations and the debut episode:

Hosts Josh Bacott (on left) and Matt Sebek seem a tad nervous on camera, (watch the movement of rolled up notes in their hands), but they nail the delivery of their jokes. And clever editing tricks keeps the show moving at a quick pace and make it ultimately an enjoyable watch that viewers will likely share just as they do Joe Sports Fan blog links.

Those familiar with St. Louis sports history will particularly enjoy the name-dropping of some of this city's less-than-talented, but still-memorable pro athletes.

Sebek writes about the show to the Daily RFT:

[It's a] weekly 15-minute video (tailored specifically around St. Louis sports) and released entirely on the web. We have a ton of interesting local partners involved to assist with production, promotion and distribution. Given that there's not much creativity in the local market in regards to sports coverage, we're hoping that something like this catches on relatively easy.