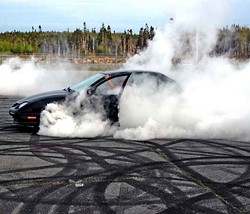 Just when you think crime and punishment in the metro east suburbs can't get anymore absurd (Taco Bell police chase, anyone?) a guy goes and escapes from the pink handcuffs of a female Brooklyn police officer.

A 23-year-old man -- police declined to name him -- was arrested Thursday evening on Adams Street in Brooklyn for reckless driving. The suspect was "spinning his tires and burning rubber" in a 1985 Chevy sedan when he lost control of the car and slammed into an unoccupied Cadillac, a conversion van, and a Ford Taurus, wrecking his vehicle.

Police caught the donut doer few blocks away but couldn't hold him for long.
The Belleville News-Democrat reports:


An unidentified female Brooklyn police officer put her pink handcuffs on the suspect, arrested him and took him to the Brooklyn Police Department. While at the police station, the suspect bolted from the police car and ran off.

[Police chief Delbert] Marion said the suspect will face charges of criminal damage to property, failure to reduce speed to avoid an accident, fleeing and eluding and escape

Marion said law enforcement in both Madison and St. Clair County are looking for the suspect, whom they know well because they've "had numerous contacts with him."