Hummer Dealership Without the Hummers Will Focus on Gun Sales

February 26, 2010 at 7:56 AM
comment
Lynch Hummer in Chesterfield was once the largest Hummer dealership in the country, according to Motor Trend magazine. With the botched sale of the GM line to China, the brand has been discontinued but Lynch hasn't been left in a lurch.

There are guns and ATV's to be sold.

Last August, the dealership, located at 17371 North Outer 40, began expanding the "Adventure Shooting Sports" wing of its business, which offered "the finest in hunting, tactical and home defense." The news then even caught the attention of CNN. Now it looks like it will become the main wing.

Tim Bryant of the St. Louis Post-Dispatch reported Wednesday that Jim Lynch, the owner of the former Hummer dealership, had been selling Hummers for 15 years in St. Louis and St. Charles, and opened the Chesterfield location in 2005.  Lynch writes on his Web site that he first saw the civilian Hummer in 1992.

"I saw my first Civilian Hummer at the 1992 St. Louis Auto Show. The Hummer brochure was the only thing I took home from that show," he writes. 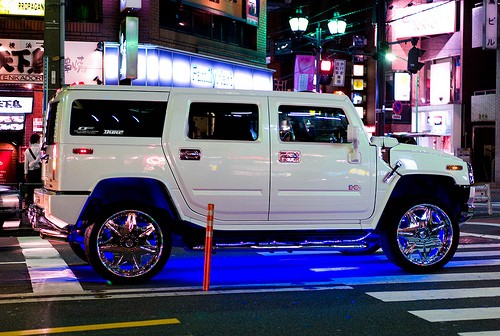 Lynch also notes that he was granted a Hummer franchise by GM in July 1994 and that the dealership became "the largest Pre-owned H1 Hummer dealer, the largest New H1 Hummer dealer and the #1 source for Hummer parts in the World. Our annual combined Hummer H1 sales have often doubled our nearest competitor."

As of Wednesday, according to the Post, there are thirteen Hummers left at Lynch.