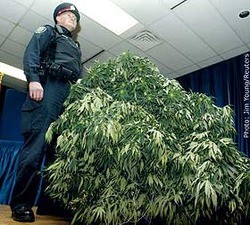 Terez Browning, 33, of Fairview Heights, pleaded guilty yesterday to possessing and distributing more than 220 pounds of pot. For this, he faces up to 20 years in federal prison and a $2 million fine.

According to a brief story in the Belleville News-Democrat, Browning was busted by inspectors from the U.S. Postal Service, meaning he was likely caught mailing packages of weed across state lines. So, for all you kids out there, that's why you use FedEx.

Elsewhere in Illinois, State Police caught two Hispanic men from California men driving a semi-truck stuffed with more than 4,400 pounds of reefer. No, their names are not Cheech and Chong.

(If you're keeping score at home, the bust tops the recent 3,700 pound mega-seizure by the Missouri Highway Patrol.)

According to the BND, the accused are actually Jesus Guzman, 31, and Eric Cabrera, 35, both from Livingston California. They were caught on February 15 on Interstate 57, near Tuscola, Illinois, and charged yesterday with unlawful trafficking and possession of cannabis. They are each being held on $1 million bonds.

If Browning is facing 30 years for 220 pounds, anyone want to hazard a guess as to how many years behind bars Guzman and Cabrera could get?