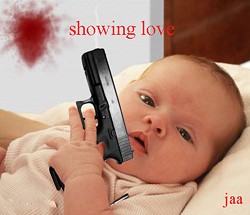 In 2003 legislators passed a conceal carry law despite Missouri voters rejecting a vote on the issue in 1999. Now those same legislators want to loosen the law they made.

Yesterday at a hearing in the House Agriculture Committee lawmakers considered bills that would require conceal-carry permits to be renewed every three years -- instead of five. Another proposal would lower the age for a permit from 23 to 21.

Twenty-one!? Obviously, legislators have yet to realize that it's our God-given right to pack heat from birth. Go ahead, kiddo, make my day!