It's South America vs. The Rest of the World In UN Soccer Benefit for Haiti At Edward Jones Dome 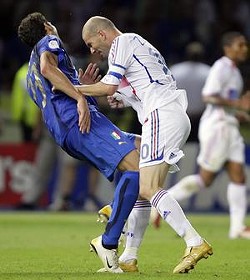 While St. Louis has its own "League of Nations" -- a rough and tumble multicultural amateur league -- it's a field-length free kick away from the United Nations benefit soccer match that will be played in the Edward Jones Dome in August.

The match is officially called the Players For Peace Goodwill Game. The brainchild of former UN Secretary General Kofi Annan, the contest will feature an all-star squad of South Americans versus a team being called "The Rest of the World." Proceeds will go toward implementing sports and education programs in Haiti and St. Louis.

The rosters have not been filled yet but organizers say they are targeting retired French legend Zinedine Zidane. Once-great Brazilian and former F.C. Barcelona star Ronaldinho is also a likely candidate since has close ties to the UN's program.

More details after the jump...


"I'm thrilled that St. Louis will be hosting the Players for Peace Goodwill Game," said Mayor Francis G. Slay. "Not only does this event serve a great cause, but it will bring visitors - including some of the world's best soccer players - to eat in our restaurants, sleep in our hotels, and visit our many attractions. I know these international visitors will return home to share great stories of their experiences in St. Louis."

Kickoff is scheduled for 1:30 p.m. on August 7. Credit for bringing the game to St. Louis goes to the Convention and Visitors Commission. Visit the official site for the event by clicking here.