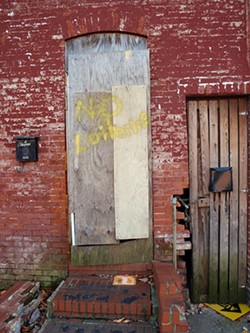 Last June, a bill designed by Alderwoman Kacie Starr Triplett to crank up the heat on deadbeat owners of vacant buildings never got out of committee. Yesterday, it finally did.

According to Tim Logan of the Post-Dispatch, the bill passed by a 6 - 3 vote at a Housing, Urban Development and Zoning comittee hearing Tuesday morning. Now it's off to the full Board of Aldermen, which could make a decision next week. (Click here for Logan's story)

As we blogged yesterday: under Triplett's bill, any structure in St. Louis that's been abandoned for six months and violates building code will go into an online registry. Its owner will get $200 tacked onto their real estate taxes. If they don't pay, they'll get hit with a $250 fine and the city could foreclose on the property.


According to the mayor's office as of March 2009, there are about 900 LRA and 4,000 privately-owned vacants abandoned structures in St. Louis.

Logan writes that a major opponent of the bill was the Ninth Ward's Ken Ortmann, who suggested that the online database would tip off ne'er-do-wells to abandoned buildings they could pillage.

As a counterpoint, Alderwoman April Ford-Griffin, who's gotten a lot of heat in the last couple years for alleged collusion with land magnate Paul McKee and his lax property maintenance in the Fifth Ward, said that in voting for this bill, the important constituencies to consider are frustrated neighbors and residents, not criminals.

Triplett said in an e-mail that her bill applies to both residential and commercial properties, and banks and mortgage companies would have to comply. Furthermore, all vacant properties would be required to have an "authorized agent" in the St. Louis area. "No more P.O. boxes or LLC's," Triplett said.