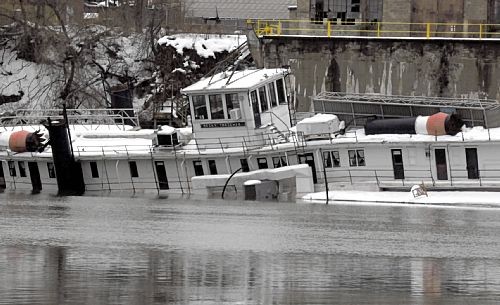 The Pittsburgh Post-Gazette reported yesterday that the 220-foot Becky Thatcher appeared to be the victim of record snowfall in the eastern United States, with the weight of the snow causing the top two decks on the 84-year-old boat to collapse.

The stern-wheeler was originally built as the Mississippi III, a dredging boat for the Army Corp of Engineers. It was retired in 1961 and briefly spent time in Hannibal as a restaurant and museum before arriving in St. Louis in 1965.

Here the boat was extensively restored and renamed the Becky Thatcher, after a character in the book The Adventures of Tom Sawyer. The ship stayed on the St. Louis riverfront until 1975 when it was purchased by the town of Marietta, Ohio, for use as a restaurant and dinner theater.

Last year the boat was moved again. This time to Pittsburgh. The Becky Thatcher was listed on the National Historic Register and a website documents the boat's transformation throughout the years.

The St. Louis riverfront now has another riverboat, also named the Becky Thatcher. Tom Dunn, director of operations for Gateway Arch Riverfront, says boat names can't be copyrighted, which is why St. Louis has been able to call another boat the Becky Thatcher for some 20 years now.

He recalls how the Becky Thatcher that sank yesterday once blew away during a storm in St. Louis.

"It was moored to the docks and was swept down river, eventually coming to rest on the east side of the river. Fortunately, no one was hurt," recalls Dunn. "Another boat also tied to the bank -- a replica of the Christopher Columbus' Santa Maria -- also blew away during that storm. It sank and had to be raised from the riverbed."