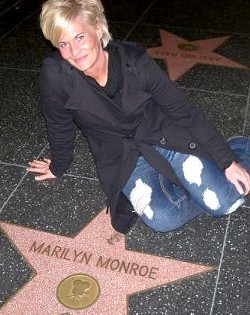 Update Thursday, Feb. 25: We're now informed that Ray and Summitt have come to an agreement.

Remember the story of Casey Ray, the St. Louis hairdresser who found the script to New Moon in a Dumpster last spring?

Turns out Ray actually found two movie scripts in the trash outside the Chase Park Plaza. One for the teen-vampire flick New Moon and the other for the upcoming film Remember Me, starring Pierce Brosnan.

When she returned the scripts to Summit Entertainment, the production house rewarded Ray with tickets to the premieres to both movies. In November, Ray attended the Hollywood debut for New Moon and partied afterword with the cast.

At the time TMZ reported that Ray was bitching about having to pay airfare to the party -- a complaint Ray's attorney Albert Watkins strongly denied.

As it turns out, perhaps there was some truth to the TMZ account, as Ray has now sued Summit.

According to attorney Watkins, Summit recently took offense to Ray's attempt to sell her tickets to the Remember Me premiere on eBay. Watkins claims that Ray's agreement with the company allows for her to sell the tickets, even though Summit has informed his client that it would not allow anyone to use the tickets except for Ray and a guest.

"Ray may be a hairdresser from the Midwest, but she is not a sap," said Watkins in a statement today. "She eats hay and can pull a wagon, don't underestimate her."