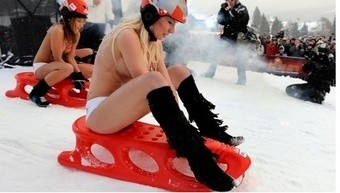 Normally, I'm in favour of pretty much anything that puts nudity front and center in the world. People just wear too damned many clothes, in my ever so humble opinion. I'm an ardent supporter of the Lingerie Bowl, and as any longtime reader of the Rundown should know, I consistently and thoroughly cover any and all incidents of athletes showing off more than they really should.
On the other hand, there are times when even I, voyeur fantastique though I may be, have to step back and say, "You know, that's just not a very good idea." Times when taste and decorum must take their rightful place at the forefront of any decision.
Luckily, this is not one of those times.
I will say this, though: nude sledging just seems like sort of a bad idea to me. Not the nude part, the other part. The part where it's like ten degrees outside and you're not wearing clothes. That part.
The Germans, though, they just have different ideas than I, apparently, about what constitutes a good idea. And the Germans have me badly outnumbered.
Over 14,000 spectators showed up this past weekend to witness a nude sledge race. Fourteen. Thousand. The sheer number of people created all sorts of havoc in Braunlage, the town holding the event. Apparently even the Germans themselves didn't think they would get the population of a small town to come out and see people strip to their skivvies and slide around on the ice.
I have two real problems with this thing. One, it keeps getting referred to as 'nude' sledging, when it's clearly only topless sledging. That's just flat-out false advertising. Everyone is still wearing their underwear. And two, I'm not one to complain about seeing women in pretty much any state of undress, but I do think they're getting seriously screwed on this one. After all, the guys all still have the important anatomical parts covered, while the girls are showing off half their fun stuff. That just doesn't seem fair to me.
On the other hand, considering what winter temperatures tend to do to the fun parts of the male anatomy, I doubt we see fully nude men sitting on a frozen hunk of plastic and sliding down a hill all that soon.
A full gallery of all the action can be found here. All the standard Not Safe For warnings apply. (Work, church, your kid's soccer game, Grandma's computer, whatever.) I don't know exactly which of the contestants was the winner, but I also don't know that it really matters. They're all champions in my eyes.