Playing the Odds on Tiger's Apology

I've actually found a reason to be interested in what Tiger Woods has to say at his press conference today. I know what you're thinking: but Aaron, how can you possibly think today's public appearance from Tiger will be anything but a farce?
The answer, of course, is it will be a farce. And honestly, it will probably be one of the more embarrassing and shameful farces we've witnessed in a long, long time. It will be a pathetic, ugly production spin-doctored to a painful degree. Tiger has ensured as much with his one-camera, small-room, limited-press, no-question format. Stalin held press conferences with more chance of something interesting coming out. Tiger will make his statement, take no questions, and disappear again. The other PGA players are already fuming he chose to pull his little stunt in the middle of a tournament (and a tournament sponsored by a company who dropped Tiger as spokesman, no less), and will likely continue to blast him afterward. In short, the whole thing is going to be a train wreck. And not a fun one, either. So why am I so looking forward to it?
Because like most other things in life, this will be made so, so much better by betting on it.
Several bookmakers, beginning with Ireland's largest service, Paddy Power, have set lines on the various phrases Tiger may or may not utter during his press conference. Several different setups are being used, but I personally think Power's format is the best.
They've divided the action into three sections: cliches, crying, and apologies. Cliches covers the opening portion of Tiger's statement, where he'll be expected to trot out at least a few hoary old chestnuts in an attempt to avoid actually saying anything meaningful. The early favourite out of the gate is "I regret the hurt I've caused," going off at 7/2. A couple of others I particularly like:
And last but not least, Tiger channelling Bill Clinton with, "I did not have sexual relations with that woman," is going off at a longshot 500/1. I might lay down ten bucks on that just because. You can't beat those odds, man. 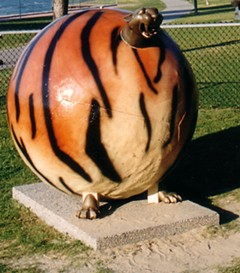 There are also odds on how many times Tiger will apologise during his statement today, with two being the favourite at 9/4. Tiger crying during his statement is at 5/2, with dry eyes going at 1/4.
The official over/under on the number of times Tiger will say he's sorry is at 4.5 right now, and it looks to be even money on whether his wife will attend the press conference.
So what do I think? Well, let's see...I think I'll go with the over on number of times he'll say he's sorry. I'm thinking 4.5 is right on the money, but I also think there might be one of those situation where Tiger actually lists a bunch of people he's sorry for hurting, which would probably push him above that number. (i.e. "I'm sorry for hurting my wife, I'm sorry for hurting my fellow golfers, I'm sorry for hurting my sponsors, etc.) If I had to bet a single number on apologies, I'll say five.
Crying? Not a chance. I don't think Tiger honestly feels bad for what he's done. Getting caught? Sure, he feels just awful about that. But he's much too arrogant to actually understand the pain he's caused others. Thanking god? Nope. As far as I know, Tiger has never thanked any sort of higher power for a victory. (You would think that would actually make me like him more, but, strangely enough, I still can't stand the guy.) I think he thanks his family, his sponsors, and says how much he loves his wife all within the first, say, four sentences. Unfortunately, as much as I would love to see him break into an Amy Winehouse number, I think he plays it straight.
Tiger definitely mentions his sex addiction at least once; I think his camp will want that angle pushed. We can feel sorry for a guy who has an addiction and just can't help himself; not so much for a guy who just looooves the pussy. Pushing the addiction angle might convince some people to get on Tiger's side as he tries to conquer his debilitating wang affliction.
So to sum up, I think the best bets are thanking his family, loving his wife, mentioning his sex addiction (that's an especially good one; 66/1 odds are sweet), and keeping a stiff, er, firm upper lip during the whole thing.
Are you as excited as I am now to see this thing go down? Wait, um, I meant, oh, never mind.