'Pampered Pets' Are Anything But, Says Animal Rights Group 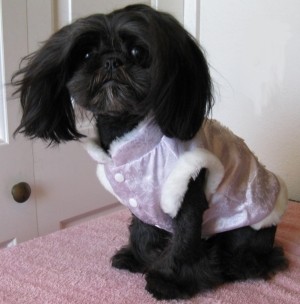 Pampering your pets is good, but Pampered Pets is bad. So says a local animal rights group.

"Pampered Pets sells dogs obtained from commercial breeding facilities in Missouri," explained Sean Jordan, the organizer of the protests in a press release. "We have examined government inspection reports for several of the breeders that this store uses, and it is obvious that many of these breeders are operating puppy mills."

Jordan and other members of MEPL (there are about 12 members so far) are staging a weekly protest at the intersection of IL-159 and IL-50, on the edge of the St. Clair Square property. The group also has a Facebook page that calls for the closing of the store.

RFT staff writer Aimee Levitt wrote about protests at other pet stores in February 2009. At the time, there was another group protesting a Pampered Pets store in Chesterfield.


Pampered Pets owner Ovella Lange is unfazed by the weekly protesters and says they've had no effect on her business. "We've sold almost 3,000 puppies in the past year," she says, "and we've had complaints about less than 1 percent."

Some of the puppies Lange breeds and sells come from her own kennel in Silex, in Lincoln County. She has been licensed by the USDA for more than five years and has passed yearly inspections by the federal agency. She insists her kennel is no puppy mill.

"Puppy mills are places where the dogs aren't taken care of," says Lange. "They're filthy. The dogs aren't vaccinated, not fed, live in nasty conditions. To meet the [USDA] standards, you can't be like that."


The Daily RFT took a look at a USDA inspection report of Ovella Lange's breeding facility. According to the report, dated November 2, 2009 (link to PDF), there were several issues:
Other complaints in the report include "excessively chewed" plastic dishes and a female dog with an injured eye, but nothing that seems to indicate cruelty or abuse (at least to this blogger).