Does McKee Have Private Financial Backing to Execute His Plan? Local Attorneys Say NO 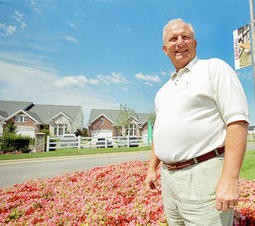 One of the major arguments driven home by the four attorneys and four plaintiffs trying to bring down Paul McKee's plan for the north side (check out this week's feature) is, basically, SHOW ME THE MONEY!

The developer can't pull off his grand vision, they claim, because he doesn't have enough private financial backing.

Here's a brief walk-through of their argument.

1) McKee estimates the first phase of his project will cost about $3.6 billion (click here then scroll to p.32 of the doc).

2) He's won tentative approval of about $200 million in TIF subsidies from the city for this first phase, according to an e-mail from city attorney Patti Hageman.

4) The only private lender to sign on publicly is the Bank of Washington, in Franklin County. But, claims attorney D.B. Amon, its letter of support never lists any dollar amount. It just says bank officials are "excited" to help. (Click here for the letter).

5) What's more, the Bank of Washington holds assets of about $744 million, according to its website. That entire sum wouldn't even cover half of the remaining cost (as Wash U. economist Michele Boldrin pointed out in court earlier this week).

Now, McKee's attorney Paul Puricelli has rebutted all this. In a December 7 court filing, he wrote that:

But the most interesting move here is how Puricelli then tries to flip the entire argument on its head:
Something else worth pointing out: The Post-Dispatch reported in June 2009 that McEagle is pushing hard for federal stimulus funds, and has identified:


38 separate streams of federal stimulus funds that might be tapped for more than 100 components of their plan -- from highway money to public housing grants to an array of green energy awards."

Time will tell whether that any of that money flows toward St. Louis at all.

These are the issues that will surely be revisited at the next trial date (this Thursday). Stay tuned.