Save the Beavers! (Translation: Fight Violence Against Women!) 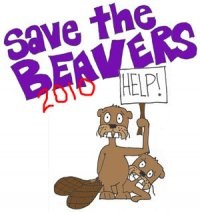 For the second year in a row, a group of Saint Louis University students will be organizing a Save the Beavers benefit party. And, uh, yeah, it's just what it sounds like: raising money for organization that protect women from violence, particularly rape.

"'Beaver' is a colloquial term for 'vagina'," explains Audrey Madison, a SLU senior and one of the party's organizers. "It's a play off words. And it's fun to put up posters all over campus with 'beavers' on them."

The benefit will be held tomorrow night, February 18, from 9 p.m. till 1 a.m. in the rec room of the University Village Loft Apartments, 3720 Laclede Avenue. There is a $5 cover, and all money will go to Karen House and the Women's Safe House here in St. Louis and women's shelters in the Democratic Republic of Congo.

Save the Beavers is part of V-Day, which bills itself as "a global movement to end violence against women and girls" and was founded by Eve Ensler, who wrote The Vagina Monologues.

"Me and a couple of friends decided to do it last year," Madison says. "We were involved with VDay stuff anyway, and this seemed like a good way to get students aware and involved." The benefit is not formally connected to SLU which, given previous conflicts between student productions of Ensler's plays and the university's administration, is probably for the best.

Last year the party raised $450. Madison hopes that amount will increase this year, thanks, in part, to the addition of a cash bar.