Mizzou Prof Gets Made Under by Oprah

Just so we're all clear, Mizzou journalism professor Cyndi Frisby does not actually teach classes in a little black dress. She wears regular work clothes. So it was kind of unfair for Oprah to ask on yesterday's Oprah Winfrey Show, "Should she be wearing that to lead our children in the future?"

Nonetheless, Frisby submitted to an on-air "makeunder" at the hands of the Queen of All Media and her fashion minion, Carson Kressley (of Queer Eye fame). Kressley took away Frisby's hair extensions and acrylic nails and dressed her in a knee-length pencil skirt, flowy blouse and jacket.

Frisby told the Columbia Daily Tribune she was mostly pleased with the transformation, but the hair extensions are "going back in today." 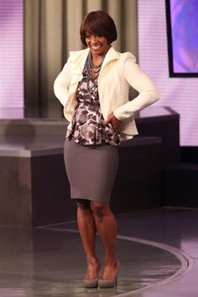 A former student who now works for Oprah recommended that Frisby make an appearance. Her makeunder was not as drastic as that of some of the other guests, like the woman whose blond hair extensions and bountiful cleavage embarrassed her children.

Frisby's segment was actually so undramatic that the producers considered cutting it.

On Oprah's web page, Frisby is quoted as saying, ""Some faculty friends would say that the reason I get some conflicts in the classroom might be because I look more like the students," she says.