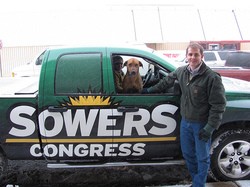 Over the past month, Democratic candidate Tommy Sowers has logged more than 3,000 miles in his Dodge pickup, crisscrossing southeastern Missouri on an odyssey dubbed "Boots on the Ground."

Yesterday we caught up with the 33-year-old Sowers -- a former Green Beret and West Point instructor -- a day after he returned to his hometown of Rolla.

Daily RFT: Nothing like a tour of Missouri's 8th Congressional District in February. What happened, were all the Cancun resorts booked?


Sowers:  Well the weather could have been better. We experienced a lot of snow. But I have to take issue with the word tour. This wasn't a tour. Who goes on tour? Let's call it a campaign.

Okay, and you did this "campaign" with your deputy campaign manager and your dog?

Yes. My dog, Chuck. He's a three-year-old Rhodesian Ridgeback. I think he won us some votes along the way.

And did I read via Twitter that Chuck up-chucked in your truck?

He threw up twice. The truck, Chuck, my deputy campaign manager and I were a little ripe when we pulled into town yesterday. Today I cleaned the truck.

What did you learn the other day when you tweeted about being "shoulder deep" in a cow's rectum?

I learned what dairy farmers know every day. It's some tough work to keep a small dairy in operation especially now. These folks are working as hard as they ever had and are falling further behind. I also learned the cow was pregnant. Very pregnant.

What were some other memorable moments of your journey?

A lot of time was discovering the broad diversity of the district. You've got Rolla and Cape Girardeau that are academic and health-related towns. You've also got tiny towns that are dying. Still, you you find hidden surprises like an international fertilizer company that's shipping to Egypt and South America or a Medivac operation that's running real time service in 14 states from a basement in West Plains or this interesting and fantastic health and natural food store in Ava, Missouri, that's been there 30 years.

What's the biggest concern of people in the 8th District?

Jobs are gone. But it's more than that. A whole generation is gone. I'd ask people where their kids live, and I almost always got the same response: Not here. People want to live and work in towns where you know your neighbors and you have a five-minute commute and property costs are low, but they're finding it increasingly difficult to do it. Part of the reason I got out of the military after 11.5 years is I believe we're at a tipping point in rural Missouri. The last days confirmed that. 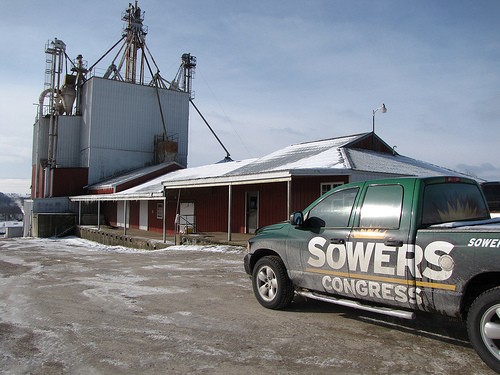 You mean they're not in a tizzy -- as some Missouri legislators would have you believe -- about changing Don't Ask Don't Tell?

I can't remember even once being asked about that while on the road. People have a lot to deal with right now. They're more interested in health insurance and their businesses. I was talking with small bankers. Their FDIC rates in some cases have gone up 2000 percent. Small community banks need to get healthy in order to ignite the economy.

You often commented via Twitter about the lack of high-speed internet in the 8th District. How slow is it there?

This to me is a critical deficit in rural America. And it's not just the Internet. It's cell phones, too. Our cell phone network across the 8th District is much poorer than one i had in Iraq. I can't tell you how many folks I talked to who told me their options are either dial-up or satellite. And it's 2010! To me that's the 21st-century interstate highway system. Before businesses move back into this region, it's something that needs to be addressed.

When was the last time a Democrat won the 8th District?

It's been since 1980. It's interesting, tough, because this votes for the person not so much the party. They voted for Jay Nixon for governor and Robin Carnahan for Secretary of State and twice for Bill Clinton. Also 57 percent of local officials are Democrat.

So what's the first thing you did when you got home Tuesday?

Fed the dog and cracked open a beer.

Think it was a Bud Light.