Cock Got Your Tongue? "Rooster Fighting" Story Leaves Local News Anchor At A Loss for Words 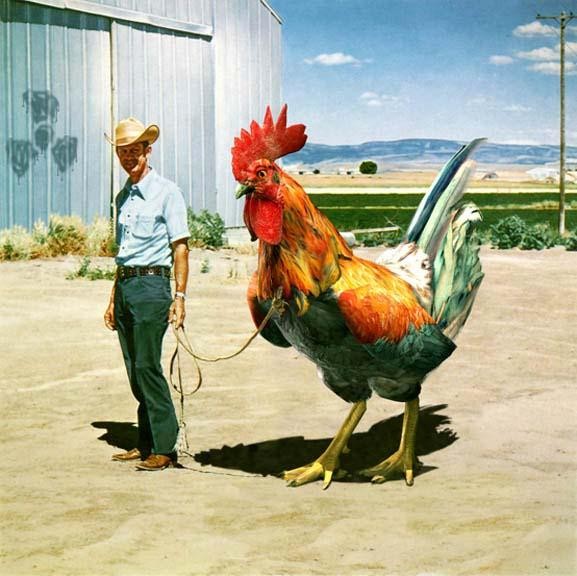 Cock. There, we said it. Laugh it up, perverts.

According to Wikipedia, the word has multiple definitions. Primarily it refers to any male bird, especially a cockerel or male chicken. It's also a verb that means to prepare the hammer of a firearm for firing, a Dutch surname, and, yes, slang for penis.

Maybe that's why the four-letter word never appears in a story this morning on KMOX about a Collinsville man who was busted for "conducting rooster fights" in his living room.

The story is by KMOX news anchor Bill Reker. It details police allegations by the Madison County Sheriff that 42-year-old James Watkins stole roosters from his neighbor then forced the birds to fight in his living room.

When police arrived at Watkins' house they found blood and feathers, a dead fighting cock in the trash and cockfighting books and trophies inside the home. Reker's report states Watkins has been charged with theft of more than $300 but there's no mention of animal cruelty charges.

It's a pretty cut and dry piece of crime reporting...except for the fact that Reker never actually called what Watkins was doing cockfighting. Why?

We sent an e-mail to the news anchor earlier this morning asking him that very question. Was it company style/policy? A subconcious decision? A fear of low-brow puns and anonymous Internet comments?


Hi Keegan,  I don't know. It was labeled "rooster fighting" in the news release to kmox news email.  I typed it out rather quickly yesterday afternoon so Carol Daniel could have it for drive time. No conscious or unconscious effort.  Kinda liked the change of wording afterall.  Got your attention.   thanks, Bill

We're still awaiting a reply. In the meantime, we should point out that this probably isn't the first time a mainstream media outlet has bitten their tongues when it comes to discussing the ancient sport of chicken-on-chicken combat. (Both the Post-Dispatch and Belleville News-Democrat were able to call a spade a spade in their versions of the story. KMOV, on the other hand, called it a "chick fight.")

However, there have been some famous stories that put cock in major news headlines. Like this one:

But the word has also spawned its share of big-time bloopers: