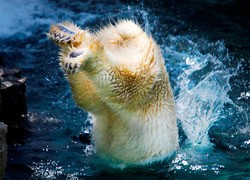 Take the case of 50-year-old Robert C. Kelly of Madison County, Illinois. On February 10 he attempted to steal tanks anhydrous ammonia (a key meth ingredient) from a factory in Highland.

Unfortunately for Kelly, a police meth task force was watching the facility as part of their "ongoing efforts to proactively combat the manufacture of methamphetamine and theft."

After Kelly realized he was about to get caught he led police on a foot chase onto a frozen pond. A police helicopter was hovering above with cameras rolling to catch what happened next.
Thanks to the always-colorful reporting of the Belleville News-Democrat's Carolyn P. Smith, we know that Kelly leapt into Silver Lake and was easily apprehended.

The BND has the helicopter video (embed disabled, click here to see it), which should be considered required viewing if you enjoy watching meth addicts and police officers take the polar bear plunge.