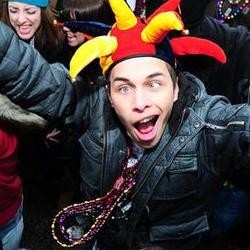 Minors in possession of alcohol accounted for more than half of the 92 arrests made Saturday during Mardi Gras festivities in Soulard. St. Louis police charged some 48 juveniles for drinking.

Police also arrested a dozen people for using fake ID's; five more for disturbing the peace; and four people for lewd conduct -- presumably for exposing themselves a.k.a. "bust busts."