Livin' in A Van Down By the River...Full of Pot Plants and Grow Lamps? 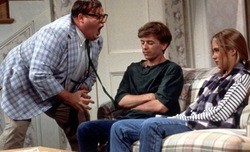 Kansas City-area police pulled over a man from Maine earlier this week and discovered a mobile greenhouse. Naturally, it was an herb garden.

Sheriffs in Jackson County, Missouri, stopped 30-year-old Nathaniel Evans for traffic violations on Wednesday and smelled something funny when they asked for his license and registration.


During a search, they found 26 marijuana plants growing in a plastic tote rigged with a heat lamp powered by the vehicle's battery, said Sgt. Steve Leone of the Jackson County Sheriff's Department.

It's unclear from the report whether Evans is employed as a motivational speaker but he did issue the following statement regarding his arrest: "Well laddi-freekin' dah!"

Just in case you have no idea what we're talking about: