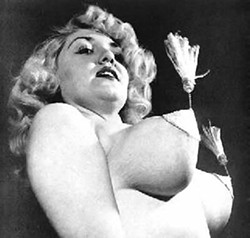 Pasties salesmen: This could be your year.

A bill that would prohibit nudity at Missouri strip clubs passed the Senate yesterday by a margin of 29-2.

The legislation, sponsored by Senator Matt Bartle (R-Kansas City), includes additional restrictions that would have a devastating impact on sexually oriented businesses, such as:
While most strip clubs in the St. Louis region are located in the Metro East, a few exist west of the Mississippi. Rhonda's Place on Page Avenue in Overland is such a joint. It already requires its performers to wear pasties. That said, I'm not sure how Rhonda's would survive without the sale of alcohol.

Farther west in the state, the few strip clubs I may have ventured into in Columbia already restrict the sale of alcohol (you can bring your own beer into the clubs), but they allow dancers to perform completely topless. Again, I don't see how those clubs would survive should Bartle's bill also receive passage in the House and be signed into law.