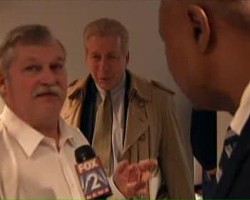 For the past two-and-half years a group Crystal City residents have been waging an all-out war with City Hall over a controversial plan to build an iron-ore smelter in the Jefferson County town.

The group Concerned Citizens for Crystal City (a.k.a. C4) is dead set against the smelter and the city's cozy relationship with the developer, Jim Kennedy, and his Wings Enterprises.

In January 2008 Riverfront Times' published an in-depth feature on the brouhaha. Then this past, October state auditor Susan Montee released an audit condemning the city and bolstering the arguments of the C4 group.

But the RFT story and state audit had little impact compared to when "You Paid for It" crusader Elliot Davis came knocking on Crystal City mayor Tom Schilly's door last week.

Video after the jump...