Traffic Has Tripled on Highway 40 Since Rebuild 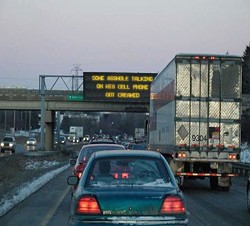 If you build it, he will come.

The words are apparently just as true for local freeways and motorists as they are for dead ballplayers and cornfield baseball diamonds.

On Saturday, KMOX quoted Missouri Department of Transportation spokeswoman Linda Wilson as saying: "The volume on I-64 has really jumped. Some sections have double to triple the amount of cars using the new stretches of highway."

MoDOT also reports that traffic on I-70 is down 10% while congestion on I-44 has slightly increased in the mornings and decreased at night.

One can easily argue that more drivers means the $524 million dollar freeway of dreams was a success. But what if the state would have spent the money on something like public transportation instead?
Would traffic be as choked up at the Poplar Street Bridge as it is now for the evening commute? Would Metro have been able to keep all its bus stops open? Would Metrolink have expanded to St. Charles or a much-needed north-south line?

In short: if they had built it, would they have come?

Or would we all still be bumping along on the old pothole-riddled Highway 40, cursing the impossibly short on-ramps and praying that an earthquake doesn't crumble the decrepit overpasses?