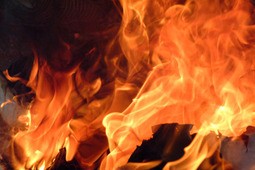 Just another day at the Wal-Mart Supercenter of Jefferson City, when a young man recently set the paper towel aisle on fire and then shoplifted a bottle of liquor on his way out -- all while carrying a small child.

Henry Medina, 18, of Holts Summit has admitted to the crime, says our state capital's newspaper, the News-Tribune. He was identified by police after officers viewed security camera footage.

All shoppers and personnel were cleared from the building as the fire was extinguished.