Over the Weekend: Taste of Soulard, Naughti Gras, Fresh Fest, So Many Dynamos and More

February 08, 2010 at 9:24 AM
comment
You know what's just awesome? Greeting a new work week with snow. Please excuse the grouchy attitude, but by this time each winter (early February), aren't most of us just ready to end it all (winter, not commit suicide, although it's probably warmer in Hell)?

Anyway, weather-caused grumpiness aside, here's a toasty recap of our weekend coverage.

So Many Dyanmos at the Old Rock House

The nasty weather on Friday night didn't stop indie rock fans from heading down to the Old Rock House just south of downtown to see So Many Dynamos, Sleepy Kitty and Capybara (who drove in from Kansas City). Photographer Corey Woodruff brings back these photos from the show.

On Friday and Saturday nights, Naughti Gras 3, an erotic-themed party featuring art, dance, and new this year, a "Naughti Market," again drew out all kinds of people interested in that sort of thing. Click through our slideshow and see if you can find our boss, dentist or otherwise normal person who let it all hang out at Koken over the weekend. 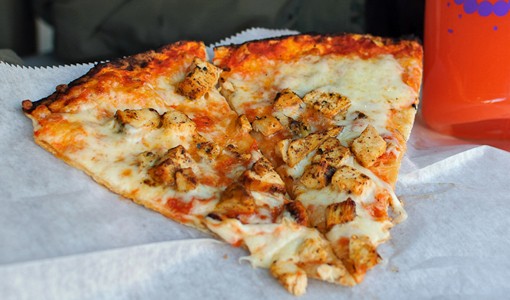 The establishments in Soulard may be best-known for their libations, and not their food, organizers of Taste of Soulard are aiming to change that with a weekend-long, pre-Mardi Gras food fair. Several restaurant cooks showcased their own Cajun or Creole-inspired dishes. On Sunday afternoon, Jason Stoff hit up the neighborhood and brings back these mouth-watering photos.

Salt-N-Pepa, Biz Markie, Whodini, Big Daddy Kane and more played "Fresh Fest" at the Chaifetz Arena on Saturday night, and it was like an '80s-themed party, reports Calvin Cox in his review of the show.