Who is Ass Clown of the Week? 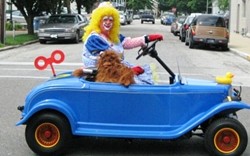 It's that time again. Time to vote for this week's newsmaker whose behavior you think was the most reprehensible/shameful.

1. David Yuhas: The Colorado man who's floating plans to build a cannabis-supported confederacy in St. Louis.

2. Zachary Walck: The seventeen-year-old arrested last week for shooting a Jefferson County sheriff's deputy. Walck was wanted for questioning in the theft of some 40 guns. Police found him holed up in a storage shed, and Walck didn't surrender without a fight.

4. Ike Skelton: Depending on your viewpoint, perhaps the Missouri Congressman may be an Ass Clown hero -- not zero. Still the powerful chair of the House Armed Services Committee took flack this week for his opposition to changing the military's position on homosexuals serving openly in the military.

Vote after the jump!