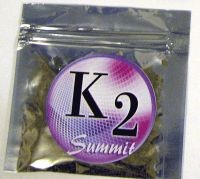 It's perfectly legal, and according to its users it gets you stoned to the bejesus, just like regular marijuana.

The product, K2, is for sale at a few tobacconists and head shops in the St. Louis area and sells for around $10 a gram.

On Tuesday, Kansas lawmakers passed legislation that would make that state the first in the nation to outlaw fake pot. And Missouri lawmakers aren't far behind with their own bill to criminalize the stuff.

As the Post-Dispatch reports today, K2 is flying off the shelves at the handful of outlets that stock the herb and it seems to be particularly popular with teens and young adults.

Unclear, though, is who makes K2. The packaging doesn't provide any information about its manufacturer. And -- like any respectable drug dealer -- the distributor of K2 wouldn't disclose his source to the Post-Dispatch.

Also unknown is the impact fake pot might have one someone's health. The Missouri Highway Patrol has tested the stuff and found it to be laced with a synthetic THC developed in the 1990s to run experiments on mice.

So whaddya think? Should lawmakers ban the stuff or is this one more reason why real marijuana should be made legal?