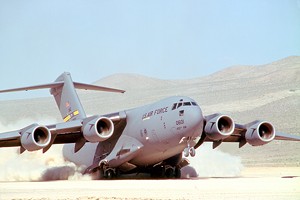 The Boeing C-17 is on the chopping block. It is supposed to be retired according to the Department of Defense budget for 2011.

But Missouri senator Claire McCaskill is among those who don't want to let the plane go without a fight. In a Senate Armed Services Committee hearing Tuesday (video below), the Missouri Democrat criticized the military for wanting to ax the plane.

The C-17 is made by more than 650 suppliers in 44 states, but a large chunk of it comes from Missouri. Jerry Drelling, a Boeing spokesperson in Long Beach, Ca., tells Daily RFT that around 1,000 St. Louis jobs are tied to the C-17 program.

No wonder McCaskill doesn't want the plane retired. According to a Boeing break-down of spending on the C-17, the plane has an $8.4 billion economic impact nationally, with over $700 million in Missouri.

President Obama wants the C-17 gone, as does the military. Defense Secretary Robert Gates couldn't have been any more clear about that.

"I'm fully aware of political pressure to continue building a C-17 ... so let me be clear," Gates told the Senate Armed Services Committee. "I will strongly recommend that the president veto any legislation that sustains the unnecessary continuation of these two programs."

The fate of the C-17 appears to be sealed, but that doesn't stop politicians from tryin' to bring home the bacon.