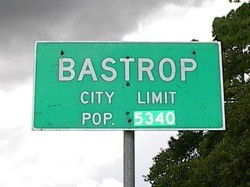 A high honor was bestowed on St. Louis today: The National Trust for Historic Preservation named the city one of "America's Dozen Distinctive Destinations."

The list has been published annually since 2000 and commends cities that "offer an authentic visitor experience by combining dynamic downtowns, cultural diversity, attractive architecture, cultural landscapes and a strong commitment to historic preservation, sustainability and revitalization."

But while it's nice to finally receive some praise in a national ranking, reading over the press release raises a few questions. Specifically: did the authors ever actually visit St. Louis? And, where the hell is Bastrop, Texas, and why are they a distinctive destination?

Starting with the latter, here are 2010's other destinations that are as "distinctive" as St. Louis:
Should we be proud to keep that company, or is it a sign that the city's population is about dip below 20,000?

Bastrop, if you're curious, is located 30 miles outside of Austin and is praised for it's "dynamic downtown" and proud residents who "honor their town multiple times each year with events like Yesterfest in April, paying tribute to the various cultures making up Bastrop's population."

Then there's the description of St. Louis:


"...a regional patchwork of architectural styles and distinctive neighborhoods. Architecture buffs and curious visitors will not be disappointed with the collection of red brick buildings, cobblestone streets and terra cotta friezes designed by some of America's most notable architects."

Enough grouching, though. The city does deserve praise, not only for it's activities and architecture (the Landmark's Association received a shout-out for their preservation efforts) but also for "greening" initiatives like the LEED-certification program.

Now let's just hope no one reads those other rankings that call us dangerous, ugly, meth addicts.