What to Watch for in Today's Illinois Primary

Another dark blue state is in play today, coming on the heels of last month's Democratic disaster in Massachusetts, a special election that probably still has Ted Kennedy turning in his grave.

The big story is whether Gov. Pat Quinn can survive the challenge from hard-charging Dan Hynes, the state's comptroller. The campaign for the Democratic nomination has grown increasingly bitter -- and tighter. Recently, Hynes took to the airwaves with a TV ad that showed 1980s footage of Harold Washington, Chicago's first African-American mayor, calling Quinn "a totally and competely undisciplined individual."

Hyne's attack came after Quinn -- who last year took over for the disgraced Gov. Rob Blagojevich -- accused Hynes of showing a callous disregard for the dumping of human remains at a historic black cemetery.

Quinn's campaign hopes the cemetery assault resonated with black voters, a critical constituency for him, and will encourage them to turn out in force. Recent polls have showed Quinn trailing Hynes among the black electorate, who comprise nearly one-third of the statewide Democratic primary vote. 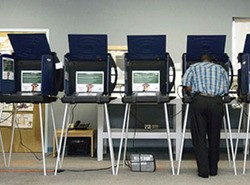 Quinn's political fortunes, to a large degree, hinge on a large turnout. City election officials, the Chicago Tribune reports, said turnout was "extremely low," in the first hour of voting this morning. Polls close at 7 p.m.

In the Democratic Senate contest, front-running state Treasurer Alexi Giannoulias is betting the farm on a high turnout in Cook County, the traditional well-spring of Democrat support in the Land of Lincoln. But Chicago Urban League CEO Cheryle Jackson has a good outside shot of taking President Obama's old seat if she can secure a significant portion of the black vote.