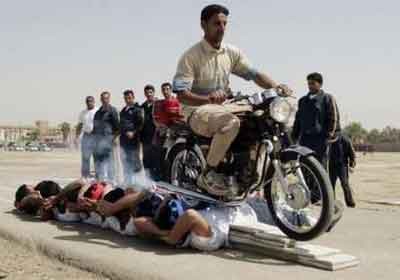 There's a punch line (or two) in the following press release sent out today from the St. Louis Metropolitan Police Department.

If you find it, feel free leave it in the comment section below.

The Metropolitan Police Department, City of St. Louis ("the department") was honored to be selected by the United States Military as a host department for a group of Iraqi Police leaders from the Baghdad Police College in Iraq. The visit occurred today and focused on the fundamentals of police training in the U.S. and assisting the Iraqi police leaders in improving their police training centers, colleges and academies.

Four Iraqi Police leaders who are among the most experienced police leaders in their country, accompanied by a language interpreter, visited the department:
The Iraqi Police leaders are being escorted by U.S. Army Colonel Randall Twitchell, who is currently stationed in Baghdad. Col. Twitchell is a chief advisor to the Baghdad Police College, working with Maj. Gen. (Dr.) Jassim in a collaborative effort to better the college.

In addition to visiting with Chief Daniel Isom and other department commanders, the Iraqi Police leaders toured the department, and witnessed demonstrations of equipment utilized by units such as Bomb & Arson and Mobile Reserve. They also participated in roundtable discussions regarding how the department operates overall and how the department trains and equips its commissioned officers.