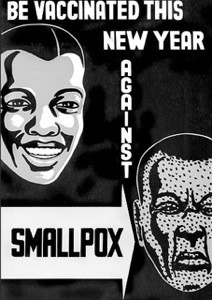 Let's hope and pray the day never comes when terrorists are capable of biological warfare. If al-Qaeda starts dropping bombs containing smallpox, bubonic plague and other deadly germs on American cities, then the proverbial poop will have truly hit the fan.

But alas, should something that dreadful ever occur, there's a new study underway at SLU's Center for Vaccine Development to help mitigate the damage.

You can get paid to help but only if you don't mind being exposed just a teeny, tiny bit of a deadly infectious disease.

The school is currently seeking 250 volunteers in St. Louis, Atlanta, Iowa, Maryland, and Seattle for study funded by the National Institute of Health.

Thanks to a global vaccination campaign, smallpox -- an ancient, highly-contagious disease that causes nasty fluid-filled blisters and has a mortality rate of 35 percent -- was eradicated from the world by December 1979, according to the World Health Organization.

So if the pox is gone, why bother with new research? Here's an explanation from the school as why they're still studying the stuff and what the project entails:


Due to concerns of biowarfare and bioterrorism throughout the world, the United States government is making efforts to improve its ability to protect its citizens in the event of a possible bioterrorist attack with the smallpox virus. The purpose of this research is to compare the immune responses of an investigational smallpox vaccine prepared in two different ways (liquid or powder with liquid added) and given in two different ways (just under the skin or between the layers of the skin).

There are a few requirements to participate in the study including:
The upside? As a guinea pig you get seven payments of $75 over seven months and the satisfaction of feeling like you're sticking it to Osama and Co.