Can the Negro Leagues Museum Survive the Recession? 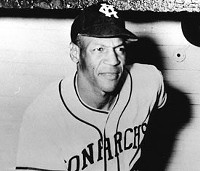 The count is rising against the Negro Leagues Baseball Museum in Kansas City.

Strike one: The recession, which is hurting museums all over the country, but the Negro League Museum, which runs largely on donations, took a huge hit this year thanks to a precipitous drop in licensing revenue. The museum has not finished its accounting for 2009, but one staffer told Associated Press that it could be facing a deficit as large as $200,000.

Despite a $1 million donation from Julia Irene Kauffman, daughter of the founder of the Kansas City Royals, the museum has postponed plans to move to a new, larger home in the old YMCA building where Rube Foster founded the Negro Leagues in 1920.

O'Neil was the great first baseman and manager of the Kansas City Monarchs who found a second career as the founder and goodwill ambassador of the museum.

After O'Neil's death three-and-a-half years ago at the age of 94, the museum's management decided to go in a new direction, deemphasizing O'Neil in favor of seeking support -- and fundraising power -- from the families of other Negro League stars, including Josh Gibson, the catcher for the Pittsburgh Homestead Grays who was said to be the only man who ever hit a ball out of Yankee Stadium.

The museum has removed O'Neil's voice from its telephone greeting and didn't publicize his birthday celebration last November. O'Neil's birthday was traditionally one of the museum's biggest fundraising events.

Several of the museum's board members consider this an insult to O'Neil's memory.

"I believe that more than any other person, the success of the museum was the result of the efforts of Buck O'Neil," said Mark Bryant, a Kansas City attorney who resigned from the museum's board last year. "If we enjoy a reservoir of good will, locally and nationally, it was built on the back of Buck O'Neil."

But Greg Baker, the museum's executive director who took over a little more than a year ago, insists that, despite the financial troubles and internal turmoil, the museum will survive:


You might say people are still in shock that Buck is gone. They are still languishing there. When you lose somebody like that, sometimes it takes a little time to bounce back. I think they will eventually see this is a really, really good strategy to help keep this museum moving and advancing. If you love Buck, how can you separate the museum from Buck? I'm not Buck O'Neil. There was only one Buck O'Neil.